Skip to primary content
Saturday we were on the road

From Ankara and Marmaris it took 10 hours. While driving through the middle of the country there is not alot other than natural beauty. This is my way of saying there was no radio station available for at least 9 hours of the trip. However, after we arrived and I was unpacking the car I found a case of CDs I could have played. That would have been nice, for me, but probably nicer for Bülent. I was a little bored at about the 6 hour mark and started singing. The songs I know well enough to sing (badly) are nursery rhymes and the poor man was assaulted by numerous versus of “Down by the Bay” and ” 5 Little Speckled Frogs.” However, all in all it was a good trip.

We stopped in Afyon and got a sucuk sandwich (the town is known for its amazingly tasty beef sausage.) There is no picture because it was too delicious to wait to eat. And then for dinner we stopped in a small town at a pide shop and got meat pide “Aegean Style” which translates into SUPER TASTY!! Served with raw onions and tomatoes. 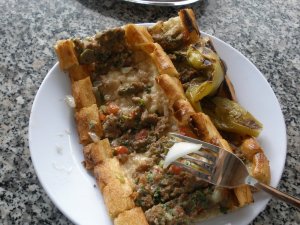 Try to look past the bug smeared windshield and appreciate what it is. It is my first glimpse of the Mediterranean after driving across the Anatolian hinterlands, and traversing several mountain ranges. We had been driving though curvy mountain passes for about an hour when we were able to see the sea. Marmaris is really gorgeous; it is situated on a small bay on the Mediterranean backed up against a mountain range. It is very warm by the sea, but about a mile back, towards the mountain a delicious breeze trickles down and it is never too hot. I am sure you will hear more about Marmaris the longer I am here.