One year ago today, my father died.  I could lament all the things he will miss. (Weddings, Grandchildren, and General Awesomeness)

However, I feel this day deserves a celebration, because my father was truly amazing.

For starters, he had some good stories.  The first time I was going to bring Bülent  home, we had to take down the twin bed in my room and set up the old double he and my mom used to share.  Apparently he bought it in the sixties and I was treated to the entire history of the bedframe.  Which I suppose was only fair as I only set it up to share it with my BF.

Also he started the Wellesley Fuck Truck, oh, I mean the Cuddle Shuttle.  When my father went to Brown in the 60’s he took some time off.  In that time he chartered (and drove) a bus between Wellesley (all women’s school I went to) and Harvard, MIT and Dartmouth (all men’s at the time).  When he stopped driving the bus and returned to Brown, the student body at my school demanded a  replacement bus from the administration.  I was also slightly wary introducing myself to alumnae from the 60’s and 70’s should they remember my last name, via my dad. 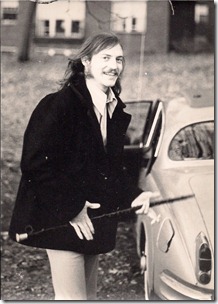 He was awesome with kids.  Seriously.  He rocked the 2-10 age group like a rock star.  Reading stories, finding age appropriate activities on-line.

He was a feminist.  My body was my decision from way back.

He was a family man.  I never doubted his devotion to us as a family.  He would love nothing more than spending time with us.

He was a reader and lover of books.  Both my parents instilled this in me.  There is still nothing more exciting than opening the first pages of a new book.

He had strong hands for a computer guy.  Often his knuckles were bleeding from some home improvement project, but he never noticed it unless one of us told him.

He talked to everyone and anyone, often creating friendships and bonds with strangers who entered his life.

He was a fighter.  Life couldn’t have been easy.  There have been tragedies and triumphs.  He was diagnosed with cancer back in 1998.  He fought with a vengeance.  Our family, and those who know us were able to appreciate that time we had.  Of course we wish for more, who doesn’t?  No one wishes they had less time with their beloved family members.  I am glad I had the time I did and the memories I had.  I have learned many things from my father, raunchy jokes and tragedy included, and am glad for everything I had.  Every movement of it.

4 thoughts on “The Things He Was”