I moved to Turkey almost 3 years ago, leaving behind almost all my my personal possessions in San Diego CA. This was really difficult.  After I graduated from college Bülent and I moved to San Diego, and slowly started accumulating the things you need to make a house a home.  A bed.  A couch.  Kitchen accessories.  We could not afford to ship everything, so we left it behind and donated it to a very worthwhile charity.  Some of the things I still miss.  One of them is my first “grown up” purchase I paid for all on my own, a red leather (pull out) couch and matching chair.

I also miss my kitchen accoutrement, especially the cast iron pan and griddle I bought.   Now, I could buy cast iron while I am in the states and bring it over here, but it is just too heavy.  Cast iron is not as popular here, and I can not find some of the things I have been looking for, such as a 12 inch cast iron fry pan, and the Holy Griddle…I mean Grail.    I love a big, two burner cast iron griddle, just like my mom had. Not only was it handy, but every time I use one I think of her and of cooking in our family kitchen.   I have not been able to find anything like it.  The closest thing was a little like this, and an arm and a leg.

But that is not THIS…

The cast iron griddle is great, for pancake and French toast, and really anything that needs a larger surface area.  Also, the grill side is great for the inside-grilling of fish and chicken and especially veggies.  You can use it to grill eggplant and make a super low fat eggplant parmigiana, with no frying at all.

Anyway, the other day, one of these cast iron griddles fell into my lap!  My kanka Terry pulled one out her her cupboard and handed it to me.  She said he had been feeling guilty owning it after I had been expounding about my search for the Holy Griddle.   No guilt needed to be felt, but then again she is Catholic, so it could have been that. *wink wink*  But since she has given it to me I have used it once or twice a week.  Once for a grilled hot salad with zucchini, eggplant, tomato, onion and cauliflower with a garlic and rosemary infused olive oil rub which was awesome.  This morning I made super yummy whole wheat pancakes.    So now I own a little piece of home, and when I whip out my cast iron griddle, I think about my mom, and now also Terry.

***Terry—I will have you over for brunch and use the griddle as part of the payment installment. There will be bacon.

We had dinner at Bulent’s aunt’s home the other night.  It is always a treat because she is a great cook.  It is also really fun because I get to practice my Turkish with her.  She is really patient and so excited by my progression in Turkish that she heaps on tons of compliments (positive reinforcement) and I always feel really confident speaking with here which actually raises my language level.

This is one of my favorite foods.  Eggplant salad.  She roasts the eggplant ( it has that yummy charred taste), and then mashes it.  After she adds yogurt and garlic that she has pulverized with a mortar and pestle (it has a different taste from a garlic press when you process it that way, I have no idea why.)  It is creamy and tangy and just amazing.

You can’t see this well because of the decoration of eggs and tomatoes but this is piyaz, a cold white bean salad, made with onions, parsley and apple vinegar.

These are whole stuffed artichoke hearts, stuffed with peas and carrots and potatoes, topped with dill.  They are considered an “olive oil” dish and served cold.

Below is a vegetable rice pilaf molded and served with green onions on top.

This is how they serve steak in Turkey.  Meat is never eaten rare in Turkey.  This is called bonfile or tenderloin.  was cooked casserole style with tomato sauce and mushrooms topped with cheese.

She really went all out with the food that night.  This is great because I am still learning how to cook Turkish foods, and seeing and eating it give me a better idea of how and what to prepare.

So as you know, we are staying in Turkey.  While this is exciting, I also miss things from home.  Like sushi and bacon.  There are just some things here that I can not get, or are incredibly expensive.  I certainly miss the convince of the U.S.  I think the biggest difference is in cooking.  It takes me twice as long to cook things here because everything has to be made from scratch.  There are no short cuts.  No cake mixes, or frozen bread dough or pie crusts.  No canned tomato sauce, or semi-prepared veggies, etc.

The good news is that we are eating very little processed food and we have lost weight without trying.  So anyone who would like to send me love swag, otherwise known as care packages, let me know.  In preparation for the flood of goodies, I have started a list. Seriously.

We have traveled quite a bit recently.  To Bodrum for our friends’ (from San Diego) Turkish wedding reception.  Then another week we drove to Bulent’s grandmothers in Seferhisar and on the way we visited Bodrum, Kusadasi, Izmir and Cesme.  Bodrum is an adorable Aegean town/city.  It is very developed and has a very busy party scene.  It has a lovely marina that runs the length of the main tourist drag, as well as a historical castle right on the sea and a renowned underwater archeology museum.

While we were there we had some Lokma, which is cousin to If Jesus was a Baker.  Sweet dough, deep fried then soaked in a sugar syrup. While you eat them, you can actually feel your fat cells expanding.  But very delicious.

Once we got to Seferhisar our days consisted of visiting with family, eating, swimming and preparing to eat.  Uncle Shadi grilled every night, there were koftes, and veggies and lamb chops and chicken.

Anything that didn’t move fast enough was grilled.  It was tasty.

Here you can see koftes, corban salad, bulgur pilaf, and grilled tomatoes and peppers. That was my plate, I was excited to eat.  Don’t I look happy!

Also naked!   I would like to state I was not eating dinner topless with Bulent’s grandmother.  Though it may appear as so.

Though in other news I over came  my shyness enough to tan topless in the yard.  Where people saw me.  Yay!

Like Loading...
This dish is super delicious. Not particularly health conscious, but incredibly tasty
You will need:
250 grams of cubed lamb
4 or 5 eggplants (longer skinny type)
fewer if you use the fatter shorter type
6 potatoes
8 or 9 cloves of garlic
6 spicy Turkish peppers
5 tablespoons of tomato paste (preferably Turkish)
3 tablespoons of pepper paste
The amounts are vague, but it is not rocket science, don’t sweat it.
Peel the eggplants, alternating peel and no peel (aesthetics)

Cut the eggplant lengthwise into quarters, then cut it into about 1/2 inch chunks.
Once you have done that, soak the eggplant into a water bath with about two teaspoons of salt in it. Swish it around a few times.

I happen to like alot of garlic, so don’t feel turned off. You don’t need to use as much as I do. Peel the skins off and reserve for later. Cut the peppers into inch long chunks.

Throw the lamb into a pot put the lid on and cook over a low heat. No oil will be needed, there will be enough later. When you add the lamb to the casserole dish later you can deglaze it with a little hot water.

Now cut the potatoes into about the same size as the eggplant pieces. Depending on the size of the potatoes you make want to quarter them. They too go in a water bath with a bit of salt. 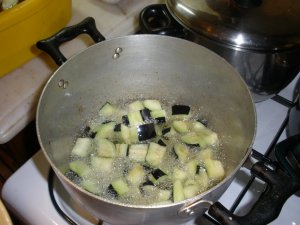 Mix the tomato paste and pepper past with water until it is the thickness of a thin gravy.

After all the eggplant, potato and lamb is cooked throw it into the casserole dish.

Now mix it all up.
Yummy!

Pour the tomato/pepper paste over the mixture.

Put the peppers and the garlic on the top of the casserole. 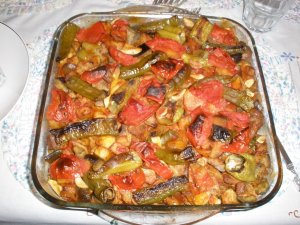 Like Loading...
I am tasting so many new things over here (the scale with confirm this) I want to be able to take back my favorites and integrate them into my cooking. So instead of just writing about food I have eaten, occasionally I will be posting recipes as well. This first one is one of my favorite dishes I have had so far. It actually pretty healthy too. Hoşaf (horshaf) is actually a compote or stewed fruit dish. It can be made with a variety of fruits such as dried raisins, apricots, plums, pears etc.
Dried Fruit 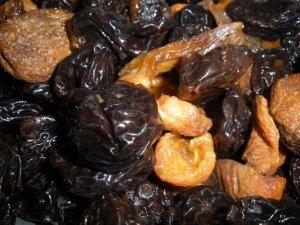 First get your fruit together, 4 cups or so. Pick through it making sure there are no unwanted elements (stones, sticks etc), then rinse your fruit thoroughly.

I prefer a main component of apricots with some plums thrown in, the apricots release their sugar more than the plums do so you end up with a sweeter juice.
Then (a hard task) get a large pot of water to a roiling boil. When it is boiling dump your dried fruit in the water and shut off the heat.

Let the fruit sit out in the water until the water cools. Once the water has cooled put the pan in the fridge. Wait at least a day before eating the hoşaf, don’t worry about using it all up. The longer the hoşaf sits the tastier it becomes. You could ad sugar (this should be done when the water is hot) but I think it is unnecessary. Hoşaf can be served as a side (usually with börek) or as a dessert. It is light and refreshing and is fabulous in hot weather.