In the beginning of the summer we did a road trip.  We started off in Texas with a visit with Bülent’s BFF Shawn.  I was able to visit with Shawn again and meet his wife Larinda.  They were great hosts, I had never been to Texas before and they had planned an awesome trip.  We visited in Fort Worth, near their home, then hopped in the truck and started the first leg of the road trip.  We drove to Austin, took a look around and then headed to the Salt Lick BBQ, a little bit out of town.  There was meat, meat and more meat!  It was amazing!

From there we drove to Fredericksburg where we hit up a few wineries and then stayed in an adorable cottage right off the main street.  A former German settlement, the buildings and cuisine have an authentic German flair.  I went running each morning we were there (Not optional: The food was amazing.  Example: Duck Hash with Eggs.  *Duck* Hash!)  It was fun, because running along there was so much to look at and enjoy.  The town had lots of great local wine, since it was close to the wineries.  It also had some really fun kitschy shops where you could buy useless but amusing things.

For your information the glassware, jam jars with stems, was billed as “Texas Crystal Wine Glasses.”  Clearly all about the class.    There were also quite a few fudge shops.  This is pretty typical in tourist towns, apparently people walking the streets for souvenirs love to court diabetes and heart disease and pack away that delicious mixture of sugar and butter.  There were also some novelty treats. 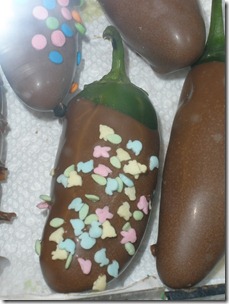 I talked with the teenagers selling the atrocities, and and they insisted people actually bought the “treats” and that they were pretty good.  I pressed them, Really?  They are actually tasty?  The boys said they liked the bacon and jalapeños.  But they remained suspiciously quiet regarding the deliciousness of the chocolate covered pickles.

From there we went to a small winery near Luckenbach, named Sister Creek. 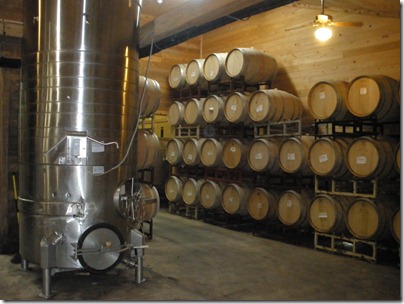 It was a small place and informal.  When we said yes, we would like to see the winery, we we told to just on on through and come back to taste when we were ready.   We had run of the place.  It was like a dream!

Generally I prefer dry wines, Sister Creek had a lovely Muscat Canneli  that was fairly sweet, almost effervescent and delicious!  We bought a bottle to bring back to NH and another for a hostess gift on the return leg of our road trip.

From there we went down to San Antonio.  We spent a night enjoying the River Walk, and in the morning went to the Alamo.   Then we drove back on up to Fort Worth.   I had never been to Texas before, and Shawn and Larinda went to great lengths to plan a lovely vacation and show us around the state.  From pit BBQ to wineries to Chocolate covered bacon, we had a blast!

1 thought on “Back to US Road Trip Adventures!”